Despite the "Charger" in the name of the Chrysler Valiant Charger, the car has no relation to the American Dodge Charger. The car was launched in the Australian market by the American manufacturer in 1962, and by ‘63 Chrysler Australia had already designed a version based on the original and incorporating many of its design cues, but better suited to the local market. This new design would debut in 1964.

For 1965, Chrysler Australia recognized the performance potential of the platform and offered a V8-powered Valiant. This was fine for a couple of years, but when the Mustang-powered GT debuted in 1967, the V8 Valiant seemed at risk of losing its market. So in 1971, Chrysler developed a fastback coupe version of the Valiant, calling it the Valiant Charger.

The Chrysler Valiant Charger was a two-door hardtop coupe introduced by Chrysler Australia in 1971. It was a short-wheelbase version of the concurrent Australian Chrysler Valiant sedan. Introduced within the VH Valiant series, it continued as a variant through the subsequent VJ, VK and CL series, until production ceased in 1978. It was marketed and badged as the Valiant Charger in the VH and VJ series and as the Chrysler Charger in the later VK and CL series.

The Chrysler VH Valiant Charger range, introduced in 1971, consisted of Charger, Charger XL, Charger 770 and Charger R/T (Road/Track) models. Somewhat modest in comparison to the investment in the development of the Hemi engine, Chrysler spent a still very sizable $22 million on the development the new Valiant, the company determined to lift its market share from 12%.

It seemed the designers of the VH got it right, with commentators of the day, along with the public, claiming the new body style to be both bold and beautiful. Charger won Wheels magazine's Car of the Year award for 1971 and was widely acclaimed by others of the motoring press. Australian Motoring News described it as "...the most handsome car Chrysler has ever produced, and probably the best looking car ever produced by an Australian manufacturer".

The range of cars was broad-based to appeal to all manner of people:

In March 1973, the VH range was replaced by the VJ series. The VJ featured changes to the grille, lighting and rear quarter feature panel, with notably 7" round headlights replacing the previous rectangular units. Significantly, this new model range saw the end of the Charger R/T. However, the essential elements of the Six Pack E37 engine option were carried over into the VJ series, now referred to as the E48 engine option.

The introduction of the VK series saw the demise of the "Six Pack" engine E48 option package, such that only a basic specification 4.3 L (262.4 cu in) engine remained. 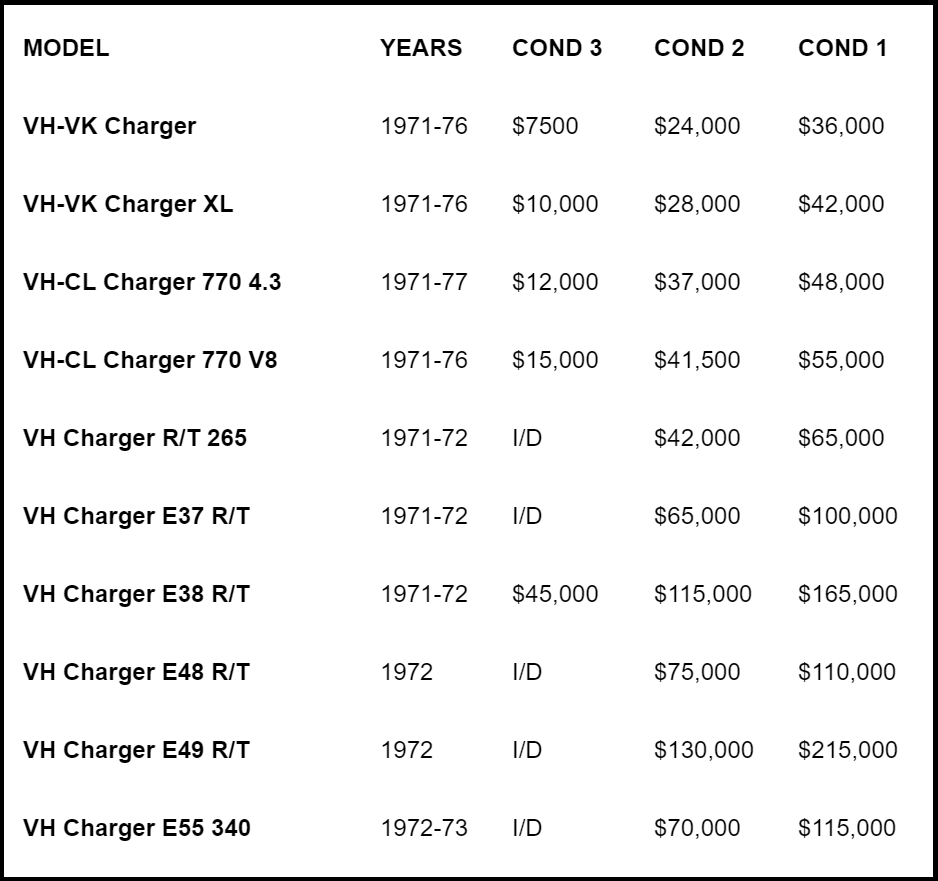 “One of the best cars I've ever owned, I regret selling my e38. I have heard of a silver big tank 49 selling in 2018 for $450k, the car is now in WA. Three cars are highly collectible, wish I had the money to buy another.” - UniqueCarsandParts.com