Car insurance means having access to financial protection in an accident or any road mishap. But it does not mean you have to overpay for it.

This document wows to fulfill financial losses associated with that particular accident you came across.

Everyone is the expert most driver in his own eyes so why do we need insurance after all? Accidents do not always happen because of our own mistakes. Right?

Car insurance costing depends on various factors like the age of the driver, the way you drive, the way you park, where you live, whats your gender and much more. And it is not a fixed price but it varies from one company to another.

Price, no doubt is the most important factor in this case but you should not always look for the cheapest of deals available in the market. Instead, thorough research must be done and a detailed comparison of the available companies should be analyzed before finalizing the selection of any car insurance deal.

One thing is of great importance here that you must go through the “Product Disclosure Statement “ (PDS) of the product you are considering or planning to get insured.

Now you will get to know about the ranges of the car costing insurances formally.

The price of Australians are paying varies from state to state. It is observed that the residents of Tasmania pay the least in this regard. On average they are paying about 811$ annually.

While on the other hand, the state which is offering the most in the name of car insurance money is Victoria Fork where the drivers pay as high as 1200$ annually.

If we consider an overall survey of the whole country, the average amount of Australians are paying is 1027$ in order to get their cars insured.

These values vary a little in surveys available on different sites but still, this is a rough estimate.

Now we will help you in getting an idea about how much car insurance costs on average with respect to different parameters. And don't forget to remember that these amounts that are going to be discussed are average amounts not fixed amounts. It can vary at any time. 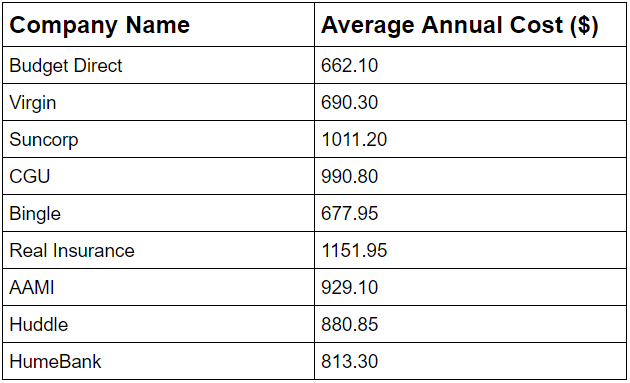 As it is obvious from the values that most of the companies actually vary a little as far as the car insurance cost is concerned.

At first, it was thought that Bingle was the cheapest company in most of the states. Only AAMI was better in New South Wales and Budget Direct in Queensland.

But when an overall average was calculated from all the states then it came out that actually Budget Direct is the cheapest in all the mentioned companies.

Generally, young drivers are considered as prone to higher risks and not many experts. So they are paying the highest amounts in order to get their cars insured.

The higher the age the lower is the risk fear (Although I don't agree) and the lesser they have to pay for car insurance.

The bottom line is that even if you think that you are the most expert driver, still you should get your vehicle insured. The average cost of car insurance varies differently with different comparison parametres. You just have to be a keen observer while selecting the car insurance deal.

On a lighter note its better you get old quickly because it might save you a huge amount of dollars.

Before getting insured, if you are planning to buy a car and want to know about its history, as a quick check is always advised then QuickREVs is the perfect platform for you.